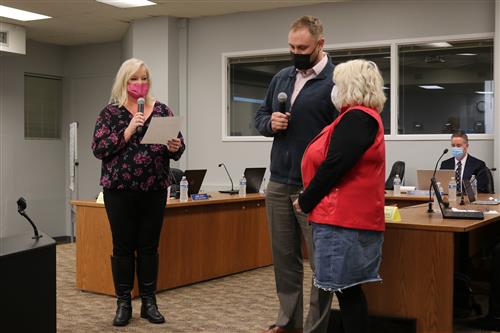 Slaughter fills OSD's 1st District Seat, previously held by former director George Kinniburgh who moved to Texas in April 2021. Since 2010, he has been an active, local citizen in the community, being involved in the Haven Teen Center since it opened in 2014. In 2017, Slaughter and his wife joined the organization's board. In March 2021, he also filled in the role of the Haven Teen Center Program Director. His wife is also the organization's volunteer executive director.

Since 2010, Slaughter and his family have hosted the annual Easter egg hunt at Rivers Edge, which they had to postpone in 2020 due to COVID-19.

He has a stepson who is a 2021 Orting High School Graduate and has two sons with his wife.

Tracy replaces former OSD Board Director Stanley Holland in the 2nd District Seat. Like Slaughter, she is an active community member, involved in the PTA, Orting Lion's Club, church volunteer, and the Orting Football Booster Club.

She has lived in Orting for over 25 years and taught at OSD schools for 22 years. Also, Tracy raised four kids in Orting, and one of them is a teacher at Ptarmigan Ridge Elementary School. Her husband, Don, sits on the city of Orting City Council.

To learn more about the OSD Board of Directors, click here.